Like many good games Marupeke has very simple rules and a clear objective. But, unlike games such as sudoku, it doesn't require the use of clever algorithms. In fact, no algorithms at all. Players need only recognise places in the puzzle where there is a potential for three identical symbols to be adjacent. And block them; nothing more. Indeed, before playing Marupeke people may dismiss it as being too easy to deserve their attention. Though when they try it, they may be surprised at the difficulty they have in spotting their next move, and may start to suspect that they have reached a dead end, and by implication that we have supplied a faulty puzzle. Heaven forfend! However, there are no dead ends: every solved cell potentially opens the possibility of finding another solvable cell. The problem is to find it; and then the next.... 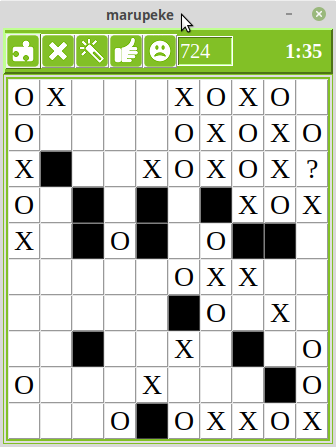 A partially completed Marupeke game. Here the player has requested a hint and the program is indicating one with a "?" symbol.

Fill in each empty cell with either an O or an X, so that no more than two consecutive cells, either horizontally, vertically or diagonally, contain the same symbol. 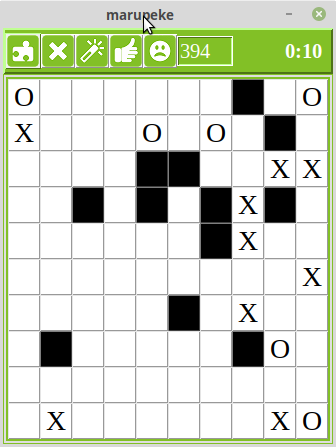 The start of a Marupeke game. Notice that there are already several cells of the form X-X or XX- which can be completed.

The jigsaw puzzle icon contains a menu used for configuring the program. A left click on the next icon to the right selects a random puzzle, a right click the next puzzle in sequence. The wand requests a hint, a second click on the wand will perform the hint operation. The thumb checks if the puzzle contains errors and a second click will clear any errors. The sad smiley shows the solution. The entrybox shows the current puzzle number and can be used to select a new puzzle number. There are 1000 built-in puzzles.

A slow and steady solution with occasionally checks using the Thumb button.