Our attention was drawn to this excellent game by a Sporcle user where it has at least two names "Trees Logic" and "Star battle". So, being fair minded and not wanting to take sides, we have given our version a different name: "Targets".

1. Each row and each column and each polyomino (shape) must contain a single Target ("O").

When a cell is ruled out from containing a Target, it can be marked by a Dash symbol ("-"). 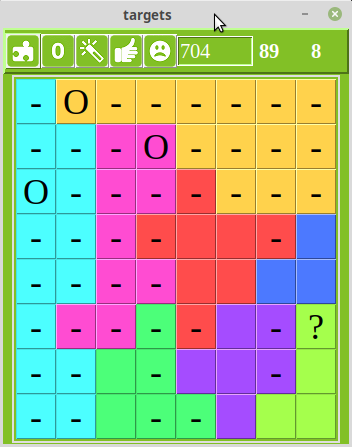 A screenshot from targets showing a partially completed grid. The player has requested a hint and the program is indicating, with a question mark, a cell which is currently solvable.

A completed puzzle has a Target (O) in every row, column and polyomino. Targets cannot touch orthogonally or diagonally. The aim is to find the Targets. A right click sets a Target (O). A left click sets a Dash (-) to rule out a Target. Middle mouse deletes either. The jigsaw puzzle icon contains a menu used for configuring the program. A left click on the next icon to the right selects a random puzzle, a right click the next puzzle in sequence. The wand requests a hint, a second click on the wand will perform the hint operation. The thumb checks if the puzzle contains errors and a second click will clear any errors. The sad smiley shows the solution. The entrybox shows the current puzzle number and can be used to select a new puzzle number. There are 1000 built-in puzzles, 200 each of sizes 5, 6, 7, 8, 9. The number to the right of the puzzle number is the difficulty rating of the puzzle, and to its right a clock. When a hint is requested its algorithm number will replace the clock and middle mouse on the wand icon will summarise the algorithm. The menu can be used to switch on and off two autofill functions and to set the font size. Autofill strip places dashes throughout the row and column when a Target is set. Autofill polyomino places dashes in the rest of a polyomino when its Target is set.")

A video from Targets. Notice that throughout the game the player occasionally clicks on the thumb icon to check that she has not made any mistakes, First the player uses the Entry box to select a particular puzzle number. Then she sees that a magenta cell touches all the cells in the lime green polyomino. If this magenta cell was a Target the lime green polyomino could not have a non-touching Target. So the magenta cell cannot be a Target. (Algorithm_8). Likewise one of the lime green cells. Next she spots that the lime green and magenta cells occupy only two vertical strips. They must, therefore, provide the Targets for both of those columns and hence all the other polyominoes in those strips can be ruled out. (Algorithm_7). Next she sees the same thing for the blue and yellow polyominoes, meaning that the green polyomino at the bottom cannot have a Target in their two columns; so she sets its last remaining cell to a Target. Notice that the corresponding row and column are automatically filled with dashes, as is the rest of the green polyomino. She then switches off these two auto fill options using the menu. The Target for the bottom row can only be in the corner and she sets that. The lime green polyomino only has cells in one row, so must provide its Target, so she can put Dashes elsewhere in that row.

The tremendous strain of performing for a worldwide audience suddenly becomes overwhelming, and in a panic, she makes some mistakes which are revealed by use of the thumb button. A second click on this button removes the errors and she is able to quickly fill in the rest and so end her ordeal.

Only 9 algorithms are required to solve these puzzles.

To solve the 1000 puzzles supplied with the game, always applying the simplest one which yielded a result, we found that the algorithms were used with the frequencies shown in the accompanying table.

The algorithms are explained below with worked examples. 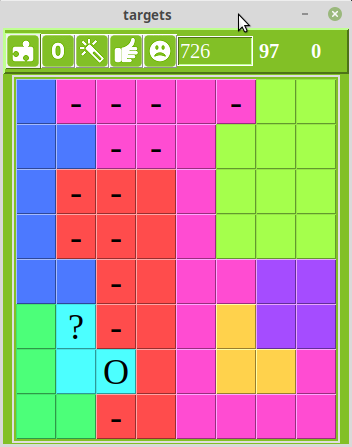 Cells in a polyomino with a set Target cannot be a Target. 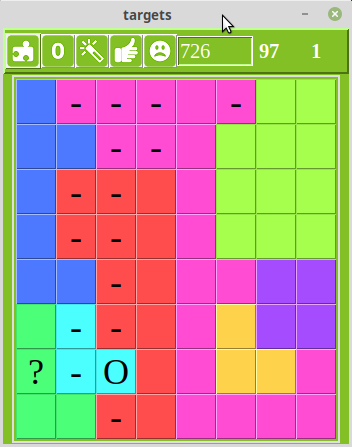 All cells in a strip with a set target can be set to dash. 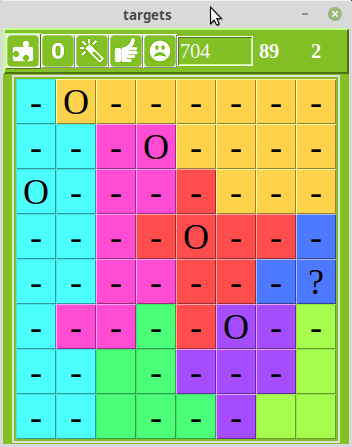 If all but one cells in a polyomino have been ruled out the last one must be a Target. 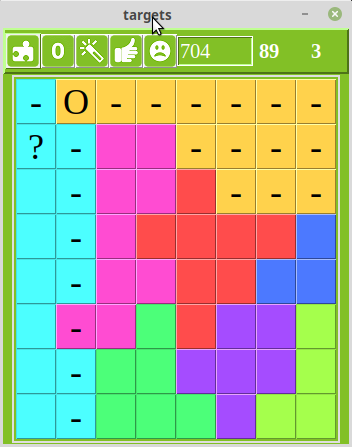 All cells touching a Target can be set to Dash. 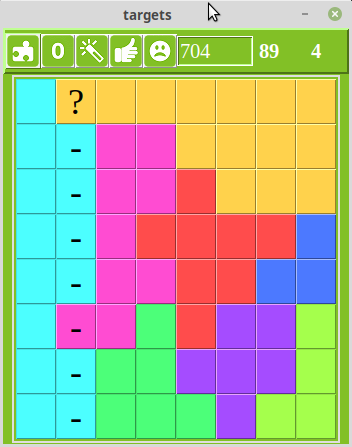 If all but one cells in a strip have been ruled out the last one must be a Target. 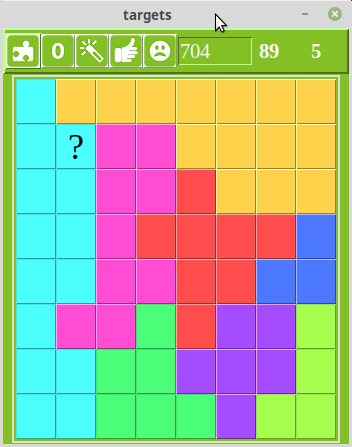 If a polyomino provides all the cells in a strip, all its cells outside the strip can be set to Dash. Here the light blue polyomino must provide the Target for the lefthand column, and so cannot have a Target elsewhere. 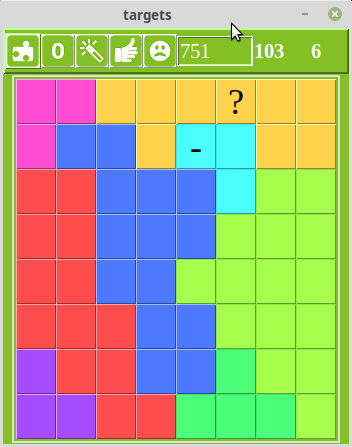 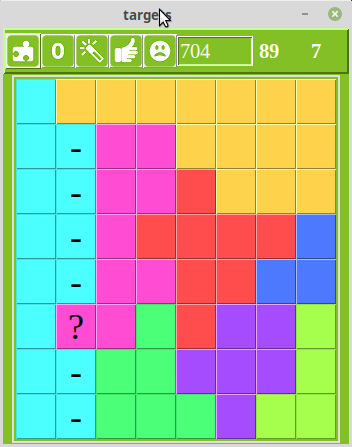